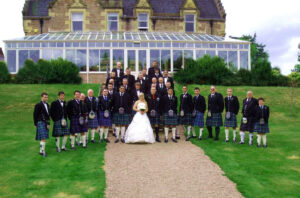 Since I spent the past weekend in Flagstaff at the Scottish Highland Games, I decided to write a blog about Scottish wedding traditions.  In this article I will tell some of historical traditions and show how some have changed for modern day weddings.
Going back to the 13th century, one of the first traditions was having the church announce your pending wedding for 3 successive previous weeks in church.  This practice was called “banns of marriage” which lasted for over 600 years.  The “banns of marriage” transformed to just a simple announcement.
Another historical tradition is called “creeling of the bridegroom”.  Creeling of the bridegroom is having the bridegroom (fiance) carry a backpack of stones on his back around town until his bride to be would come out and give him a kiss.  Historically, they held 2 wedding services.  The first service was held just outside the church doors and was spoken in Scottish.  The second service was performed inside the church and was spoken in Latin.  During the second ceremony the couple would pledge an oath on a stone.  This oath could be their vows, a poem or a Scottish blessing.  After the couple was pronounced man and wife, the groom was take some of the plaid from his kilt and pin it on his wife’s dress proclaiming that she is now part of his heraldry.  the couple would us a “quiach” which was a 2 handed drinking cup.  They would use this during the mass and also for their first toast during the reception. 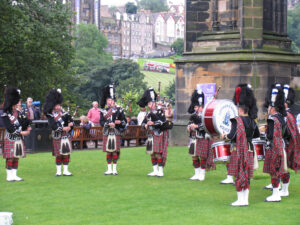 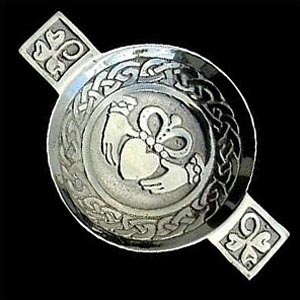 Once both ceremonies are over, pipers or a group of bagpipers, would play their pipes and lead the couple and their guest to a family members home for a huge party that would last all night long.  Currently the pipers would lead the couple and the guest to a restaurant for the reception or they play in the parking lot until the couple gets inside their vehicle and sometimes will continue playing once they arrive at the hotel.  A traditional Scottish wedding cake would have 2 layers of a brandy or whiskey fruitcake.   One layer would be eaten at the reception, the other layer would be eaten to welcome their first child’s birth.
Once the party was over, the bridegroom would carry his new wife over the threshold of their home.  It was believed that evil spirits were at the threshold of the home and that is why the groom would carry his bride over the threshold.  Once inside the priest would bless the home and the couple in their bed.